Steps in the oil refinery process

The oil refinery process is largely dependent on the type of seed from which the oil is being extracted, and whether the final product will be edible or not. Most of the refining process that takes place in oil milling plants is that of edible oil, which makes it important for plant owners to know the steps involved. Crude oil that is refined to become edible oil is taken from oil mills as well as solvent plants and processed in oil refinery plants specially made for vegetable oils. The main reason for the oil refinery process is to remove unpleasant odor and other factors that are undesirable so that the oil has uniformity of color and is of high quality.

When refining edible oil there are a number of steps that need to be followed with the first one being distillation. During distillation, the oil is heated until the chemical solvents that were used in extraction evaporate. The next step is degumming which involves the removal of gums as well as solvents that can dissolve in oil, by passing water that is hot throughout the oil to remove impurities. The third step is neutralization where the oil is treated using sodium hydroxide to remove waxes, fatty acids, pigments among others. 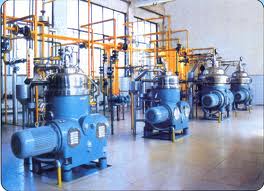 Bleaching is another step which is done using high-activity clay removes components that are “off-colored” from the oil. The clarity of the oil, especially those that will be refrigerated is done through a step known as dewaxing. Deodorizing involves the evaporation of compounds that are unstable by using steam that is of high pressure in treatment. Edible oils also need to be preserved and this step involves the use of BHA or BHT. Finally, filtration is the last step which helps remove large impurities but without the use of chemicals.

This entry was posted in Oil Refinery Process. Bookmark the permalink.